First TV Spot Released For GUARDIANS OF THE GALAXY

If you missed the new spot that debuted on last night’s Agent’s of SHIELD, check it out now!

If you missed the new spot that debuted on last night’s Agent’s of SHIELD, check it out now! While a lot of the footage is not new, there’s a lot of new behind the scenes stuff that they added just for this spot. 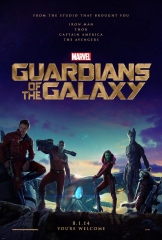