In a lot of ways, I’ve enjoyed the Funko Mystery Minis more than the actual Pop! figures. They are just as fun, but at a fraction of the cost and shelf space. Now, they’ve unveiled the second series of their Horror minis as well as their very first set of Best of Anime minis. 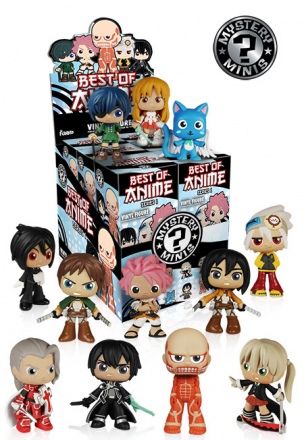 First, here’s the line up for the Horror set:
Mohawk (Gremlins 2)
Shaun and Ed (Shaun of the Dead)
A color and a B&W version of Alfred Hitchcock with a raven on his arm (Birds?)
The Fly (The Fly remake)
Pinhead (Hellraiser)
Gillman (The Creature from the Black Lagoon)
Edward (Edward Scissorhands)
Frankenstein
Nosferatu
A normal and a glow-in-the-dark version of Cthulhu
Beetlejuice
Eric (The Crow)
Spike (The Lost Boys)
Warewolf of London!