Gentle Giant has created amazing collectibles for everything from Star Wars to Harry Potter. Now they are about to tackle one of the biggest licenses of all, Marvel Comics.

Gentle Giant has created amazing collectibles for everything from Star Wars to Harry Potter and even more alternative licenses like the super cool Death Jr and the upcoming Sucker Punch. Now they are about to tackle one of the biggest licenses of all, Marvel Comics. They are leading off with mini busts for Black Cat and the Chris Hemsworth movie portrayal of ‘Thor’. Here’s the release from GG along with product details and images.

The reelase:
Gentle Giant Ltd. is proud to announce a new partnership with Marvel Entertainment! In our ongoing efforts to bring new and uniquely special pop culture products to market, GGLTD has recently licensed several new categories of collectibles. Look forward to seeing Mini-busts, Bookends, Desk Accessories, beautiful Bronze items, Life-size pieces and character Statues featuring detailed vehicles and much, much more.
Coming soon are Deadpool on his Motorbike, interchangeable bookends allowing you to choose which hero battles which! And an ongoing line of mini-busts featuring all your favorite heroes like The Hulk, The Thing, Spider-man, Wolverine and many more, plus offerings from the Thor, Captain America and Avengers films! Make mine MARVEL!

Marvel Entertainment, Inc. is one of the world’s most prominent character-based entertainment companies, built on a library of over 5,000 characters featured in a variety of media over seventy years. Marvel utilizes its character franchises in licensing, entertainment (via Marvel Studios and Marvel Animation) and publishing (via Marvel Comics).

– This could actually be really cool, I can’t wait to see the Deadpool Statue. 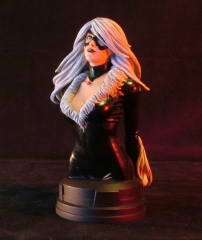 Black Cat (aka Felicia Hardy) the “cat” burglar extraordinaire and one time love interest of our friendly neighborhood Spider-Man has nothing to hide…or does she? Holding a simulated diamond behind her back, one per master carton will come with a variant ruby red colored facsimile gem.

At just over 7“tall, this mini bust is one of the first in a long line of new Gentle Giant produced Marvel collectibles.

Cast in high quality poly-stone, then hand painted. Black Cat is a numbered limited edition that comes packaged in a window box complete with certificate of authenticity.

**We checked with Gentle Giant just a couple minutes ago and they wanted to make sure that everyone knows the chase variant of Black Cat with the ruby stone will also be available online as the Web Exclusive. 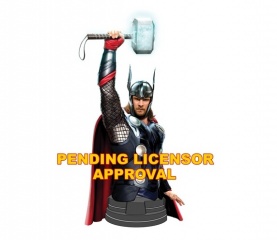 Thor has come a long way since his first appearance in Journey into Mystery #83! Pulled from the comic pages and now hitting the big screen in 2011 and even further on into coming Avengers films!
The film accurate Norse god raises his Mjolnir Hammer high and ready to take on all challengers.
Digitally scanned from film actor Chris Hemsworth, and then cast in high quality poly stone. Each limited edition hand painted piece comes numbered and boxed with a certificate of authenticity.
Make mine Marvel!