Check out Hot Toys new and improved take on the Black Costume Spider-Man from Spider man 3. Along with the New Costume, he comes with a great Sandman Base! 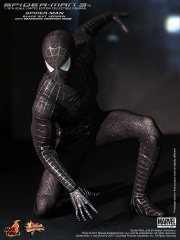 Costume :
– One (1) black Spider-Man suit with improved silvery web and honeycomb pattern on head and body, with spider icon in the front and at the back of the body, with one (1) pair of black silvery web patterned boots

Accessories:
– A total of five (5) strips of web including:
Two (2) for imitating the flying scene
Two (2) of cobweb shooting
One (1) of cobweb opening 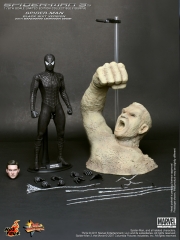 Diorama Base & Figurine Stand:
– Diorama base featuring the Sandman in the movie
– Figurine stand with Spider-Man nameplate and the movie logo

Special Edition:
– One (1) meteor hammer as bonus accessory for exchanging with the fist of Sandman in the diorama base