I’m not sure what to say other than… May God have mercy on my wallet.

What you just heard was the sound of a million geeks running to change their pants all at the same time. Hot Toys, the company that has created the collectible figures that makes all other figures cut themselves in shame as they cry themselves to sleep at night, has formally announced that they are taking on one of the greatest licenses of all time, Indiana Jones, and dropped a not so subtle hint that they will be unveiling what will be the most desirable line of toys ever next year.

“Here, we are excited to bring you with the teaser of our MMS DX Indiana Jones Collectible Figure from the Indiana Jones – Raiders of the Lost Ark movie, which is a collaborated project with Sideshow Collectibles, and will be FIRST unveiled in the Hot Toys 10th Anniversary Exhibition

In 2011, we will have even more breathtaking, overwhelming and unexpected licenses to be announced! Stay tuned!

THE FORCE IS STRONG WITH US!!!”

That’s right… Mother F’n Star Wars Baby! I’m not sure what to say other than… May God have mercy on my wallet. 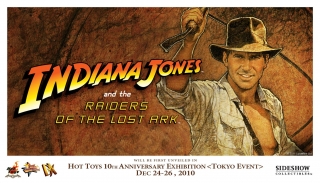