What is it about mechas that instantly turns me into a freakishly excited 12 year old? 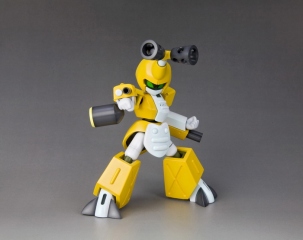 MEDABOTS KBT00-M METABEE FINE SCALE MODEL KIT
A KOTOBUKIYA Japanese import! Medabots (or Medarot in Japan) is a 14 year old franchise known around the world for its video games, anime series, and manga. In the main storyline the young Ikki wants nothing more than to compete in the World Robattle Tournament, and with luck and hard work comes to posses the main robot of the series. Now that famous character is Kotobukiya’s first Medabots Fine Scale Model Kit, KBT00-M METABEE! A beetle-type Medabot specializing in revolver tactics, the stout warrior is resplendent in his bright yellow and white paint scheme. Metabee looks exactly like it did in the anime and video games, with boxy armor plating, large feet, forearm mounted cannons, and rhinoceros beetle-like head weapons! The little fighting unit comes with a large array of accessories and optional parts like multiple facial expressions and hands, dialogue sign, a Medabots motif stand, and special effects to simulate bullet firing and missile launching. Metabee comes pre-colored and its snap-fit assembly requires absolutely no glue! At 6 inches tall (1/8th scale), this is one cool little Medabot! 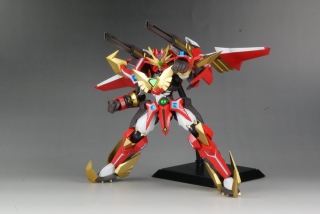 SUPER ROBOT TAISEN ~ G COMPATIBLE KAISER FINE SCALE MODEL KIT
A KOTOBUKIYA Japanese import! You’ve seen it before but never like this. One of the classic robots from the Great Battle IV returns to the Super Robot Taisen Fine Scale Model Kit in a new version, the G COMPATIBLE KAISER! Keeping its bright red and gold paint scheme, the Kaiser robot is fully upgraded with all new features. At first glance, the G version resembles its predecessor with its geometric armor, flared shoulders, winged chest plate, and flashy feet. But the upgraded form also includes the “Over Kaider Sword” and a massive back-mounted booster unit that can be removed and transformed into the Plane Mode “G Thunder Gate!” Perfected by mechanic designer Obari Masami, this kit is as close to the original designs as possible. G Compatible Kaiser is composed of approximately 400 pieces cast in different colors, eliminating the need for painting. The fighting unit stands over 9 inches tall and as a special bonus, the G includes alternate face parts and a mini figure of pilot Fighter Roa! 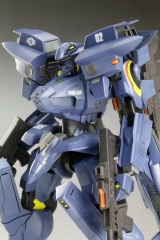 MUV-LUV ALTERNATIVE ~ F-18E/F SUPER HORNET: MARINE TROOP FINE SCALE MODEL KIT
A KOTOBUKIYA Japanese import! Kotobukiya’s exclusive collection of Fine Scale Model robot units from the epic Muv-Luv Alternative expands with the first machine from the good side, the F-18E/F SUPER HORNET: MARINE TROOP! The robot’s fighter jet-inspired motif is plain as day with a navy blue color palette, aerodynamic armor plating, and even a small airplane nosecone in the abdomen. With a 100% all new sculpt based fully on a CAD design, this amazing robot has specially engineered articulation and enhanced joint movement for increased poseability; its arms can even move independently of the shoulder armor, which itself can be posed! Ready to spring into battle, the Super Hornet comes with a huge array of weapons including knives that can be stored in the knee armor, four assault rifles, optional decals, and more.