Get a sneak peak at Koto’s concept sketch for their upcoming Wonder Woman Bishoujo statue now.

Kotobukiya has announced their plans to produce goods based on DC characters reinterpreted by Japanese artists. The new series will begin with 2 of the finest and coolest new product categories DC x Bishoujo and Stylized Vinyl Figures. From concept, development to production, a new approach will be taken on DC characters. Koto plans to create a running series that will capture the collectible fan hearts. With years of experience with Bishoujo statues, and stylized [super deformed] characters, the new concept series is sure to excite fans world wide.

Get a sneak peak at Koto’s concept sketch below. If the Wonder Woman Bishoujo statue turns out into looking anything like the Marvel ones, we’re all going to be a little less poorer in 2010. 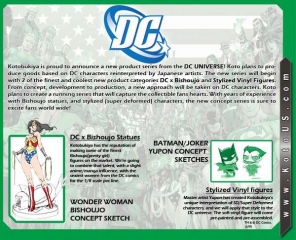