If you are a fan of Kotobukiya’s Bishoujo style figures, SDCC is going to feel like Christmas. They just announced that they will be doing Marvel and DC Exclusives: Evil Supergirl and The Fantastic Four’s Invisible Woman.

Wow, there sure has been a lot of collectibles news today, but it looks like Kotobukiya made sure that the week ended with a bang. They just announced their SDCC 2011 Exclusives and it looks like they will be two of the hottest toys at Comic-Con this year! Check out the full descriptions and photo galleries below. Now, if you’ll excuse me, I have to go clear some space on my shelf… these beauties will be mine! 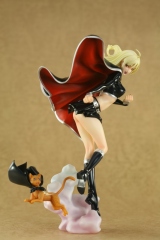 A KOTOBUKIYA Japanese import! Coming this summer is a limited edition variant of one of the hottest DC Comics Bishoujo Statues yet! The hit line combining DC’s most beautiful female characters with traditional Japanese stylings has seen plenty of heroines, so it’s time to go bad with EVIL SUPERGIRL LIMITED EDITION! While there have been various incarnations of the character throughout the years, the current one has taken the world by storm. Reintroduced to fans in 2004, Kara Zor-El is the Kryptonian cousin of Superman and has all of the same superpowers. In 2005’s Supergirl #5, Lex Luthor used a Black Kryptonite ray to create a duplicate, evil version of the heroic Supergirl. While the two would later re-assemble with the help of Wonder Woman, Kara’s evil alter ego gained instant fame for her bad attitude and sexy look. Evil Supergirl is based on a design by illustrator Shunya Yamashita, Japan’s leading bishoujo artist known for his art books, video game work, and multiple figural collaborations with Kotobukiya.

Based on the current “New Earth” version of the character and costume and inspired by Supergirl #5, Evil Supergirl arrives on the scene literally floating in the clouds! Dressed in her malevolent two piece black, silver, and vermilion outfit consisting of a very short skirt and midriff-baring top along with knee-length boots, the young Kryptonian proves that bad can look oh so good. Evil Supergirl flies on top of a small cloud formation, twisting to look behind her (and in the process showing off her long legs and just a peek at her silver panties). She’s even joined by an evil, black caped version of her faithful kitty companion Streaky the Supercat! Supergirl’s beautiful flowing blonde hair is further accented by translucent material, and perfectly frames her Bishoujo-styled face with new yellow eyes and dark makeup.

Constructed of high-quality pvc plastic and standing nearly 10 inches tall (in the ultimate 1/7 scale) as she floats on her exclusive base, Evil Supergirl was sculpted by Masahiro “Gill Gill” Takahashi. Limited to only 1,500 pieces (starting with a 360 piece early premiere at San Diego Comic-Con) this dark beauty won’t be around for long! 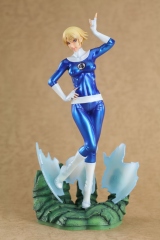 A KOTOBUKIYA Japanese import! Kotobukiya is proud to present its convention exclusive for San Diego Comic-Con 2011, a new variant edition of the hit Marvel Comics Fantastic Four Bishoujo Statue: INVISIBLE WOMAN SDCC 2011 EXCLUSIVE! In the first issue of Fantastic Four in 1961 Sue Storm was a member of Reed Richards’ doomed spaceflight that encountered cosmic radiation, imbuing the four humans onboard with strange abilities. With powers of invisibility and force field creation, Sue became the Invisible Woman (though at first she was the Invisible “Girl”) and a core member of the Fantastic Four! The first version of the character in the amazing Marvel Bishoujo collection (combining iconic superheroines and villains with traditional Japanese stylings) captured the character in her modern outfit with special translucent effects. Now Sue Storm is back again featuring her classic 1980s costume and some great special features, all based on an original character reinterpretation by illustrator Shunya Yamashita!

She may have the power to disappear from view, but the Invisible Woman is on full display here! The sultry Sue stands on her defeated opponent, shedding her protective force field and showing off with a jaunty pose. Casually walking toward you with one hand on her hip, the fantastic heroine points towards the sky with an all new hand gesture and shorter hair. The Invisible Woman is dressed in her traditional Fantastic Four costume, an ultra skintight bodysuit showing off all of her sexy curves in metallic blue and white with the team’s logo on her chest. This new costume looks incredible on her with a bright shimmer and excellent details down to the open fingers on her gloves. While she’s fully visible this time around, the force field shards around her are a nice nearly-translucent pale blue. The Invisible Woman’s strong pose and alluring figure are perfectly topped off by a beautiful Bishoujo-styled face that shows off her confidence and power after a tremendous battle!

Invisible Woman stands just over 9 inches tall (in the current Marvel Bishoujo 1/7th scale) on an amazing georama base depicting the hand of the gigantic green monster from the cover of Fantastic Four #1, “The Mole Man’s Monster!” This exclusive version is limited to just 500 pieces and will be available exclusively at San Diego Comic-Con 2011 and via limited pre-orders on www.kotous.com!