This is disappointing news to fans as this new line-change consist of mainly a refresher wave for those who missed out on UFC Wave 1 and 2.

Jakks Pacific has announced a line-change to their upcoming UFC collectible action figures Wave 2. The new line-up will now feature:

Instead of the originally announced lineup. This is disappointing news to fans as this new line-change consist mainly of figures that were already released in UFC Wave 0 and 1. Wave 2 has officially been turned into a refresher wave for those who missed out before. Noticeably absence now are the much anticipated Lyoto Machida (pictured below) and George St. Pierre figures. 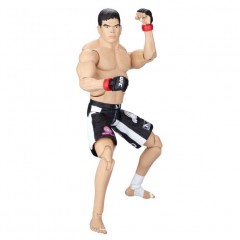