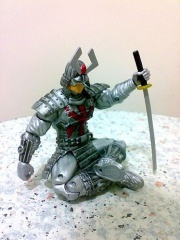 Courtesy of Hong Kong blogger Gum_5, we have new loose images of some upcoming Marvel Universe action figures. They are from the new 2-packs features Deadpool Vs Taskmaster and Silver Samurai vs Patch.

According to the review, the Silver Samurai figure has the new articulation and surprisingly good mobility. It even has the new Iron Man ankle joints. The only downsize is it being packaged with another Wolverine figure and his deformed swords.

Deadpool is similar to the Wolverine Origin version, but it does come with a new head, hands, body straps, belts and weapons! It has improved hands for holding weapons. The shoulder strap and belt are divided into two rather than being linked as one in the Origin version. This provides better movement in the waist essentially freeing up the articulation. It has the same articulation as Task Master but is slightly better. But it essentially uses the old Marvel Universe buck.

Task Master is the most disappointing of the 2-packs. It is largely a repainted figure with just a new skull head. His only upside is that he comes with a plenty of (reused) accessories: sword, bow, pistol, quiver, gun belts and other bags. It uses the old Marvel Universe buck and his articulation is severely limited as a result of the old style and cape. The reviewer even asks why Hasbro is cutting corners with Task Master. Ouch.