Mattycollector has revealed some carded and finalized images of their upcoming DC Universe Classics wave 17. This wave will consist of six figures have share the Blackest Night storyline. The figures include:

Each figure will come with a Collect and Connect piece that’ll allow you to build the modern Anti-Monitor!

DCUC wave 17 will be on sale in late Spring 2011. We’re guessing in a few weeks to next month as factory rejects from overseas are already showing up on ebay! 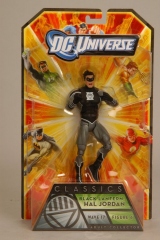