Standing approximately 2 inches tall, Mezco’s new take the ever popular Hellboy and friends is sure to make even a troll smile…

Who would have thought a blue collar superhero such as Hellboy would ever get this much attention? From Mezco’s press:

Standing approximately 2 inches tall, Mezco‘s new take the ever popular Hellboy and friends is sure to make even a troll smile. This case of includes twelve 2packs featuring the following figures:

*Hellboy with Big Baby- Whatever you do, don’t make Hellboy wake the baby!
*Prince Nuada- The leader of the elves.
*Hellboy in black shirt- Hellboy ponders his next move.
*Abe Sapian- Hellboy’s aquatic pal.
*Hellboy in action stance- He’s crouched down and ready to fight!
*Johan- Hellboy’s ectoplasmic teammate.
*Wink- Prince Nuada’s troll sidekick.
*Golden Army Soldier- A member of the 49,000 member supernatural army built by goblin metalsmiths.
With BPRD Buddies you relive your favorite Hellboy adventures, or create new ones of your own! 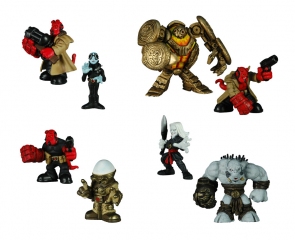