In an unprecedented move, Mezco will be offering a unique package to customers who order the set unseen, months in advance.

New York- Each year the Living Dead Dolls Resurrection series contains some of the world’s most sought after dolls. Collectors worldwide battle to secure a set.

In 2014, the series will be distributed around the globe in an attempt to give fans a better chance to fulfill their dream of acquiring this rare commodity.

In an unprecedented move, Mezco will be offering a unique package to customers who order the set unseen, months in advance;

* A haunting set of 4 limited edition art prints by renowned Japanese photographer Yuki Abiko. Each set of prints will come with a signed and numbered certificate of authenticity. Additional sets will be available later in the year for $130.

* A remarkable coin especially created for the storyline of these dolls. This real metal curiosity will retail separately for $20

* A luxurious XL ebony hooded sweatshirt featuring the Living Dead Dolls logo in vibrant blood red on the sleeve and The Box Leads To Madness logo on the back. Downy soft and warm on the inside, rugged and sturdy on the outside. Details in the ribbed cuffs and waistband keeps the shirt where you want it as you move about. This hoodie will retail separately later in the year for $40.

This special bundle, a $450.00 value, is available for 7 days only, and only while supplies last.

Buyers of the bundle will also be added to a special mailing list and will receive 1st notice and 1st chance to purchase another Top Secret Living Dead Doll item to be offered later in 2014. 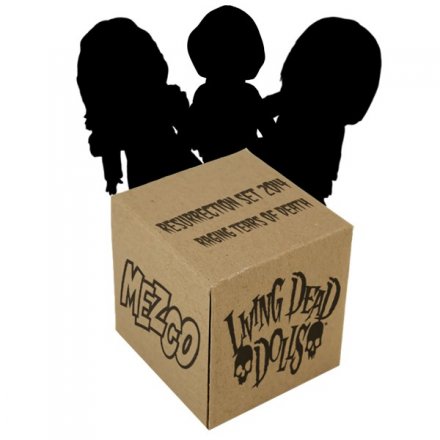