Here’s your first look at Mezco Toyz’ new line of Living Dead Dolls Plushies! Nothing says adorable than creepy and cuddly dolls of horror. These 8″ dolls can be pre-ordered now and are expected to hit in July.

As both stare at you with their unblinking eyes, you can’t help but wonder what terrifying plans they have in store for when the lights go out. 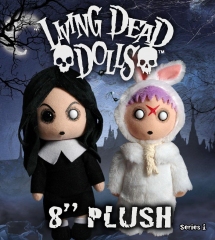