We got our first glimpse at this amazing new Frankenstein from Mezco at this year’s Toy Fair. Now, we’ve got the official announcement and a release date of November 2012!

We got our first glimpse at this amazing new Frankenstein from Mezco at this year’s Toy Fair. Now, we’ve got the official announcement and a release date of November 2012!

Here’s The Official Release:
Mezco proudly presents one of the world’s most famous monsters…Frankenstein! Constructed by the infamous Dr Frankenstein from corpses, and resurrected by curious machines powered by a bolt of lightning, he terrorized the countryside.
Now he is brought to life by Mezco’s award-winning design team. This 18inch Monster Scale Frankenstein features eight points of articulation.

This Monster Scale Frankenstein is sure to become the focal point of any collection as it towers above all lesser collectibles. 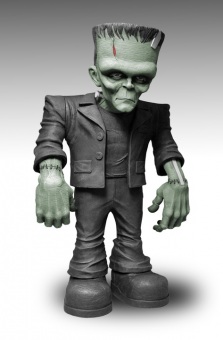 Since being revealed at the New York International Toy Fair, the Monster Scale Frankenstein has generated some monster size buzz:

“The must have Frankenstein collectible of 2012!” – Mike Zohn of Discovery Science’s Oddities

“Frankenstein done in a scale he so richly deserves – the best large scale version I’ve seen in years!”- Michael Crawford of MWCToys.com

Each Frankenstein is packaged in his own collector friendly display box and ships in November 2012….just don’t tell the villagers.

About Mezco Toyz
Mezco Toyz LLC, specializes in the design, manufacture, and marketing of toys and collectables for all ages. A design-driven company that continuously thinks outside the box, Mezco is a leader in collectable action figures, doll manufacturing and marketing. Creators of brands such as Living Dead Dolls, Hoods, Creepy Cuddlers, Mez-Itz and more, Mezco also produces many of today’s most popular collector-friendly licensed products including: South Park, Hellboy, Popeye, Family Guy, Scarface, DC Universe, Little Big Planet and Thundercats to name a few. With a consumer outreach that is comprised of wholesale, distribution and direct to consumer networks; Mezco’s product placement abilities span worldwide. The award-winning company has offices in the United States as well as in Hong Kong, overseeing all aspects of design, marketing and manufacturing.