Check out what happens when the creepiest dolls ever created take over the windows of one of the world’s most famous comic book stores! 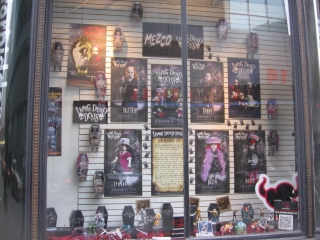 New York- While protestors and police organized in Union Square, and hundreds of fans prepared to rush in to the morning show of The Hunger Games and the local Regal theatre (free refills on large popcorn and soda!) a shadowy figure cloaked in black worked silently behind fourteen foot tall panes of glass. Silently, as sweat glistened on his ritualistically shaved head, he carefully arranged tiny coffins, and perilously climbed a monolithic wall to meticulously affix a series of custom made vinyl banners to the slat wall of what may well be New York’s most famous comic and collectible shop. The purpose? To promote the world’s best selling, longest running series of horror themed collectible figures; The Living Dead Dolls. The location? The legendary Forbidden Planet. The New York store has been featured in The Authority (vol. 4, #2) and Landau, Luckman & Lake, a fictional organization in the Marvel Universe, is named for the original three founders. Regularly listed as one of the top ten comic book shops in the US and one of NYC’s “must see” spots for tourists, the fabled den of heroes is now home to a unique display that has collectors of the popular Living Dead Dolls giddy with wicked delight.

One of the stores immense windows facing the ever bustling Regal movie theatre has been transformed with a unique series of larger than life images. Beneath a central banner featuring the Living Dead Dolls and Mezco Toyz logos hangs a banner advertising the upcoming Series 23 of the Living Dead Dolls. Flanking the sides of the group shot of the hotly anticipated series, are individual portraits of the individual dolls in the series. Individual Living Dead Dolls have never been featured on their own banners before and the effect is stunning. Beneath the banners is a series of lenticular images that eerily seem to change as bewildered spectators pass by. The whole display is surrounded by a series of coffins, each filled with its own Living Dead Doll, each doll hungrily watching unsuspecting pedestrians with their unblinking eyes. 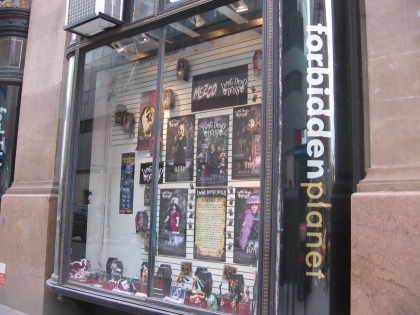 Forbidden Planet’s manager, Jeff Ayers says of the display “We’ve been carrying Living Dead Dolls since the beginning and they have always been popular, but this new display has really attracted attention. It’s raising awareness and bringing in new fans. We’ve definitely won new customers!”

Another employee, who asked no to be identified, said “The LDD display is one of the best windows we’ve had in a while….but when I walk past it at night after we close the shop it kind of freaks me out. It’s like the dolls are just waiting for their chance…” .

Due to overwhelming demand caused by the display, Mezco will be offering the banners from the window as part of a limited edition series available exclusively on MezcoDirect.com.

To order your very own Living Dead Dolls direct from MEZCO, CLICK HERE!
# # #

About me:
A writer and PR guy by trade, I’ve been in the business since 1987 when I sold my 1st piece to Playboy. My work has appeared in Rolling Stone, Baby Boomer, Newsweek, Psychology Today, Playboy, Omni, FHM, ASB magazine, and others.