MINDstyle Toys is a big friend of YBMW and we wanted to take a moment to show off their latest and greatest upcoming hit product as part of their new license with the NBA. The new vinyl figures, designed by Korean artist, CoolRain, a something new for the sports community. Sure, there was some pretty cool vinyl from Upperdeck over the last couple years, but it isn’t anything like this. There hasn’t really been this much buzz over sports toys since McFarlane first announced that they’d be adding Athletes to the shelves next to Spawn.

As with any good blind-boxed vinyl, you can be that there’ll probably be some great variants in the set for you to chase after. As soon as we’ve got more info, we’ll give you the scoop. 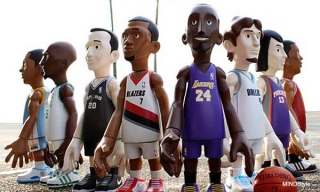