UK toy company Charter Limited have released a set of new Scooby-Doo figures based off Cartoon Network’s new “Scooby-Doo! Mystery Incorporated” series. The set includes five figures of all your favorite characters from the show – Scooby, Shaggy, Fred, Velma and Daphne. Each figure comes with more than eight points of articulation.

The figures are similar to the original Scooby-Doo figures released by Charter Limited in the 2000, but with noticeable differences. They’re retooled (if not entirely new sculpts) with more detail, most noticeably in Fred, Daphne and Velma who now sports jointed elbows as oppose to swivels.

The new “Scooby-Doo! Mystery Incorporated” figure set will retail for $10.99. 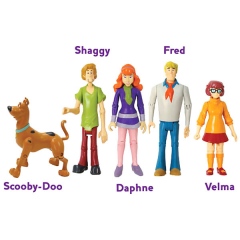