Batman: Arkham Asylum Series 1 Action Figures are based on the game designs of the “Most Critically Acclaimed Superhero Game Ever.” 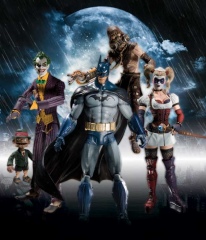 It’s a madhouse … and the lunatics are running the asylum!

After arriving on Arkham Island, Batman is greeted by Warden Sharp and security personnel. Although The Joker is securely strapped to a handcart for transfer to the deepest bowels of Arkham, he escapes nonetheless. This is going to be the worst night of Batman’s life. With The Joker free, inciting unrest among the inmates, Batman faces a riot from a cadre of Gotham City’s most wanted: killers and psychopaths who are screaming for vengeance and out for blood. Batman’s blood. His mission? Stop The Joker – and his accomplices – at all costs.

Welcome to the asylum. Arkham Asylum.

BATMAN: ARKHAM ASYLUM SERIES 1 ACTION FIGURES are based on the game designs of the “Most Critically Acclaimed Superhero Game Ever.”

All four figures feature multiple points of articulation and include a display base. Character-appropriate accessories are also included. 4-color clamshell blister card packaging.