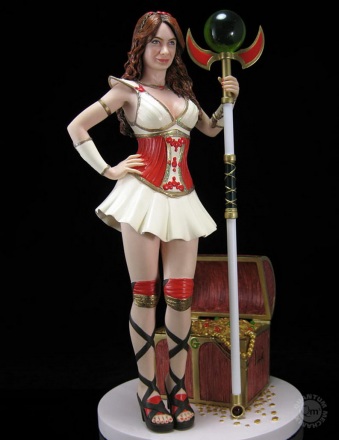 LOS ANGELES – July 10, 2012 – Quantum Mechanix Inc. (QMx) announced today that it has completed development of the first-ever 1:6 scale realistic figure of Codex as portrayed by Internet superstar Felicia Day. This statue, inspired by the American comedy Web series The Guild, created and written by Day, will be available for viewing on QMx’s Web site and also at this year’s San Diego Comic-Con.
“I love the figure, they captured Codex in-game perfectly!!” said Felicia Day, who worked with QMx to ensure the figure was not only photorealistic, but also screen-accurate, costuming-wise.
Part of QMx’s Figure line, The Guild Codex figure is more than 11 inches tall, cast in professional-grade resin and painted by hand.
“We’re very honored that Felicia Day agreed to let QMx make her character Codex the subject of our first 1:6 scale, realistic statue,” said QMx CEO Andy Gore. “The results speak for themselves. I think you can expect to see us do more in 1:6 scale realistic figures.”
Each The Guild figure will be released as part of a limited edition. To be the first to find out when these unique figures are available for purchase, and to keep an eye out for Web specials and other exclusives, sign up for:
• QMx Insider newsletter http://insider.quantummechanix.com/
• QMx on Twitter http://twitter.com/QMxInsider
• QMx on Facebook http://www.facebook.com/QuantumMechanix
Fans who want to see Quantum Mechanix’s work up close should stop by the QMx booth (#2944) during Comic-Con International 2012 in San Diego. The Codex figure will be among the products on display.
The Guild is an independent sitcom Web series about a group of online gamers. The show started in the late summer of 2007 and for the first season was financed solely by PayPal donations from loyal fans. All five seasons of The Guild can be seen on the YouTube channel “Geek and Sundry.”
Episodes vary from 3-8 minutes in length, and follow the Guild members’ lives online and offline.
The Guild has won numerous awards, including the SXSW, YouTube and Yahoo Web Series Awards in 2008, and 3 Streamy Awards in 2009: Best Comedy Web Series, Best Ensemble, and Best Actress for Felicia Day.
The Guild is produced by The Knights of Good Productions, Inc.
About Quantum Mechanix
Based in Los Angeles, Quantum Mechanix Inc. (QMx) develops the most-desired geek candy: screen-accurate replicas, collectibles, apparel and artwork inspired by entertainment’s most beloved shows and movies. We focus on serving the most demanding customers – from dedicated fans to the industry’s most prestigious production companies and studios – with the most detailed and accurate products possible.
QMx currently operates under licenses from such studios as Paramount, MGM, NBCUniversal, CBS Consumer Products, Mutant Enemy, Twentieth Century Fox and the BBC. Licensed franchises include Super 8, Doctor Who, Star Trek, Warehouse 13, Battlestar Galactica, Doctor Horrible’s Sing-Along Blog, Stargate SG -1, Stargate Atlantis and Stargate Universe, Serenity and Firefly, Despicable Me and The Guild.