Doc Savage is undisputedly one of the most famous characters to come out of the pulps. Street and Smith Publications’ Doc Savage Magazine ran from 1933 to 1949 and was revived in the early 1960s as paperbacks. Those paperbacks identified the look we attribute to the Man of Bronze today. One of the best artists whose work graced those covers is Bob Larkin. This statue is our tribute to Doc and to Mr. Larkin. Sculpted by Tony Cipriano and paint mastered by Kat Sapene. Certificate of authenticity is included. 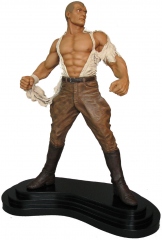 Created by Will Eisner, Sheena was the first female comic-book character with her own title. Inspired by H. Rider Haggard’s She, Sheena paved the way for a host of other jungle queens to follow. Sheena has transcended comics to television and film. One of the most endearing and enduring portrayals of Sheena was by Irish McCalla in the 1955-56 TV series. This statue is our tribute to the character, her comic roots, and the actress that made her real for the postwar generation. Sculpted and paint mastered by Joy and Tom Studios. Certificate of authenticity is included. 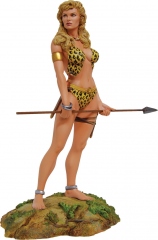