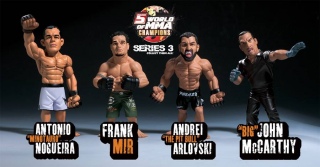 MARKHAM, Ontario, Canada, June 11, 2009 – Round 5 figurines for Andrei “The Pit Bull” Arlovski, “Big John” McCarthy, Frank Mir and Antonio Rodrigo “Minotauro” Nogueira, comprising Series 3 of the popular mixed martial arts collectibles, are now available at retail, it was announced today by Round 5 C.E.O. Barron Lau and President Damon Lau. They join the first two Round 5 Series which can be purchased in outlets throughout North America and online at www.Round5MMA.com.

“We are extremely pleased with the final products for Series 3,” said Damon Lau. “Each of the athletes had extensive input into their development, and I know that fans will enjoy the ’small touches’ that make Round 5 figurines unique.”

Round 5 also confirmed today that Series 4, scheduled for late July/Early August release, will now feature five athletes, Gina Carano, Dan Henderson, Cung Le, Mauricio “Shogun” Rua and Matt Serra. The Fedor Emelianenko figurine, originally intended to be issued as part of Series 4, is going through an additional redesign and will instead appear as part of a future Series.

“We continue to work closely with Fedor and his team on making his figurine as accurate and true to his persona as possible,” added Lau. “Consumers appreciate Round 5’s commitment to producing collectibles that capture each athlete’s individual style, and we look forward to completing the Fedor figurine with that goal in mind.”

Round 5 is also preparing for its large presence at the UFC Fan Expo in Las Vegas in July, where near-complete prototypes of Series 4 will be on display.

In addition to this week’s release of Series 3, Round 5 has issued two Series of four athletes each: Randy Couture, Matt Hughes, Quinton ‘Rampage’ Jackson and Tito Ortiz comprised Series 1 while Rich Franklin, Sean Sherk, Anderson Silva and Wanderlei Silva were released in Series 2.
Round 5 plans to release collectibles of two additional series of athletes later in 2009, one during each quarter. Athletes to be represented in those series are yet to be announced.