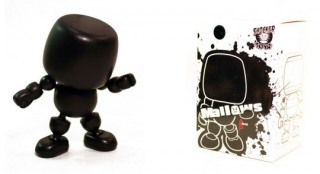 Shocker Toys has the rights to develop, manufacture, market and sell designer figures called “Mallows” based on characters from the four series. Mallows is a new toy line created by Shocker Toys and comprised of 5” marshmallow themed figures. The figures feature up to 10 points of movement and up to 7 interchangeable parts. Mallows are available themed or in blank, black or white, do-it-yourself versions.

Sadly, the license deal however does not include 6″ articulated figures similar to Shocker Toys’ Indie Spotlights.

“We look forward to Shocker Toys bringing these series into the homes of fans and collectors in a fun, new way,” said Adam Zehner, Director of Licensing and Acquisitions at FUNimation Entertainment. “We can’t wait to see how our characters will be translated into the unique Mallow style.”

“We are very pleased to be working with Funimation to bring their great titles into a new Funimation series Mallow toy line for their dedicated fans,” said Geoff Beckett, CEO. “Our new Mallow collectibles will have great options for playing, trading or displaying and some new features that your other toys don’t have.”

Attendees of American International Toy Fair in New York City at the Jacob Javits Convention Center, February 14-17, can see like figures on display at the Shocker Toys booth (#4924) located in the new Action Figure aisle in the lower level of the Javits Center.

The company expects to begin production on the figures this year.