Sony today has announced that Mezco Toyz is going to be releasing toys based on the popular video game, Little Big Planet. From the press over at the Sony blog:

“The very first LittleBigPlanet merchandise makes its ‘littlebig’ debut this week with a brand new action-figure line featuring an assortment of 4″ scale Sackboys in all his textured and stitched glory, displaying various characters, poses, and costumes. Those attending the 2009 International Toy Fair in New York will be among the few who will catch the very first glimpse of the action-figures that will be available at select mass market, specialty and online stores across North America beginning this Spring.

Toy developer and manufacturer, Mezco Toyz, will also release retailer exclusives, variants and limited-edition Sackboys throughout the year, which will range between 2″ and 18″ scale figurines.

If you happen to be attending the 2009 International Toy Fair, feel free to drop by the Mezco Toyz booth at the Jacob Javits Center (#4823) for your sneak peek at the new action-figures. However, if Toy Fair isn’t on the list of your destinations this year, plan on coming by their booth at the 2009 Comic-Con International Show this summer in sunny San Diego.

Stuff’d SackBoys (and SackGirls)
You’ll be glad to know that the highly sought after, officially licensed SackBoy plushies are on their way. Unfortunately, we still need some time to knit, stitch, and stuff a few loose ends before we reveal more…” 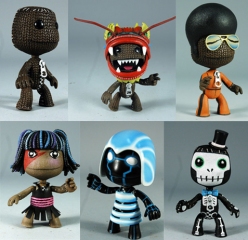