The 100 Helmets of THE VADER PROJECT 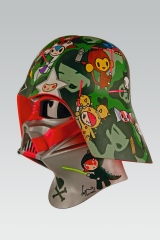 You can pre-order the Auction Catalog at www.thevaderproject.com

This summer, The Vader Project launches the final chapter of its four-year art odyssey. The iconic collection features 100 Darth Vader Helmets re-imagined by today’s most notable artists. Completing its epic world tour, The Vader Project returns to Los Angeles in June for a special ten-day exhibition in Hollywood as a preview to the upcoming Freeman’s Auction in Philadelphia.

The Los Angeles Preview Exhibition is free to the public with an opening reception on June 11 from 6-10pm. The show will also feature a 200-plus page, full-color, limited edition catalog that is being produced for the auction and is available for pre-order now at www.thevaderproject.com. On June 12, the space will present a catalog signing event with over 20 participating artists in attendance beginning at 2pm on June 12. The Los Angeles Preview Exhibition will be open June 12-20 daily from Noon to 6pm.

In July, The Vader Project travels to Freeman’s Auctioneers and Appraisers in Philadelphia, Pennsylvania for the final opportunity to view the helmets in person before they are sold at auction. “The result is astounding” said Simeon Lipman, Pop Culture Specialist at Freeman’s. “The sale will give members of the public the chance to purchase unique artworks made from these iconic symbols of the movie industry by a number of well known artists including Shag, Marc Ecko, Tim Biskup, Frank Kozik and many more.” The Freeman’s Auction will take place July 10, 2010 at Freeman’s Auction House in Philadelphia, Pennsylvania preceded by a 5-day exhibition there July 5-9. www.freemansauction.com

Curated and produced by Dov Kelemer and Sarah Jo Marks of DKE Toys, The Vader Project features 100 of the best underground artists and designers working today. “From a simple idea in 2005 to a record-setting exhibition in 2009, it’s time for our child to venture forth into the world,” Kelemer and Marks said. “We are pleased to have partnered with Freeman’s to make these fine pieces of art available to the public for the first time.”

Since its premiere in 2007, The Vader Project has toured the world. The collection launched in May 2007 at the Star Wars Celebration IV event in Los Angeles, and travelled internationally to Europe in July 2007 and Japan in July 2008. Most recently The Vader Project was on display from February 13 – May 3, 2009 at the Andy Warhol Museum in Pittsburgh, Pennsylvania.

This auction is not sponsored or endorsed by Lucasfilm Ltd., and has no relationship with Lucasfilm. Star Wars and all related intellectual property is © or ® 2010 Lucasfilm Ltd. & TM. All rights reserved.

Featuring the art of: