The Walking Dead Season 3 Blu Ray Set Is The Creepiest Ever!

AMC’s The Walking Dead comes back this Sunday to finish out the stellar third season of the show. Even though we are only half way through it, Mcfarlane Toys is already showing off the freaky new collector’s edition Blu-Ray that they designed for season 3.

To fan’s delight, he has re-created the Governors’ zombie head aquarium.
Governor’s “TV” set-up in their home.

As you probably already know from watching the show, The aquarium is the secret relaxation spot of the sociopathic new bad guy, the Governor, who is played by David Morrissey.

Amazingly, McFarlane and his team designed the case before season three even started filming. They just worked off the comics and the scripts.

Here’s what McFarlane and Robert Kirkman have to say about it:

Kirkman:
“McFarlane has a very intimate relationship with AMC, so I was approving concepts on this Blu-Ray case before Season Three even aired. So while we were building things on set, Todd and the team at McFarlane Toys were coming in and scanning actors and scanning props. So having them come in and do the fish tank with the severed heads while we were still building it for the show is a pretty cool thing, and I think makes these products much more accurate and cooler for the fans.”

McFarlane:
“We thought it would be fun for the consumer, after buying the case and taking it home, had to get a little interactive, because we’re not supplying the water! So you’re going to have to fill up the tanks yourself, and we’ve got little hooks on the heads, so you can arrange them any way you see fit. You can hang them in a certain order, or you can just let them go to the ground and flop around. No one person’s case has to be exactly like the other’s. 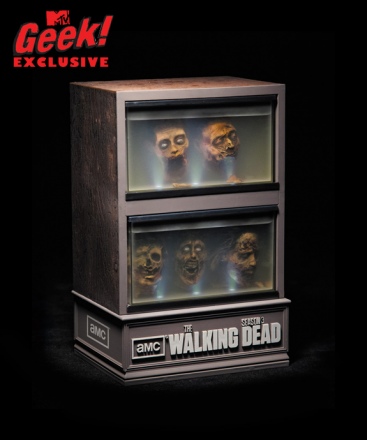