Michonne is part of Series 1 which will be based off the comic book.

Following yesterday’s news of McFarlane Toys producing action figures based on the Robert Kirkman’s “The Walking Dead” series, MTV has uploaded the first look at the Michonne figure. Michonne is part of Series 1 which will be based off the comic book. Below you can see it in its unpainted prototype stage.

Series 1 is due out in September 2011 and will include four fan-favorite characters from the Image comic book:

The second series of deluxe 6-inch figures is revealed in November 2011 and introduces four figures based on AMC’s original drama including:

The entire line will debut this weekend at Toy Fair 2011. 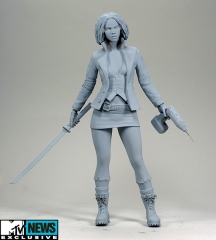