You won’t believe your eyes when you see these girls kick some serious butt in Zack Snyder’s new film Sucker Punch!

Zack Snyder’s ‘Sucker Punch’ is sure to be at least as big a hit as ‘The Watchmen’ just for the action and special effects alone. The steam punk, hot girl, post apocalyptic action adventure looks pretty darn sweet from what we’ve seen so far, and now we are getting an even closer look at one of the great statues that Gentle Giant is putting out for the film.

On a side note… anyone attending Comic Con next summer should send a thank you note to Zack Snyder now. This is an all girl movie with amazing costumes. You have to be that what you see in camera is going to be a preview of the most popular female costumes at SDCC this year 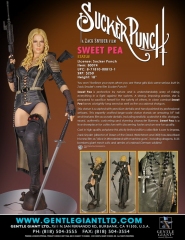 You won’t believe your eyes when you see these girls kick some serious butt in Zack Snyder’s new film Sucker Punch!
Sweet Pea is protective by nature, and is understandably wary of risking everything in a fight against the system. A strong, imposing warrior, she is prepared to sacrifice herself for the safety of others. In close combat Sweet Pea favors a knightly long sword as well as the occasional shotgun.
This statue is sculpted with precision details and hand painted by professional artisans. This expertly crafted large scale statue stands an amazing 18” tall and features film accurate details. Including realistic, scaled M-4 rifle, shotgun, sword, authentic costuming and stunning character likeness. Sweet Pea is a true showpiece for collectors with discerning tastes and an eye for quality.
Cast in high quality poly-stone this strictly limited edition collectible is sure to impress. Each Sucker Punch statue is mounted on a clear acrylic base, specifically designed to showcase the piece and allow light to pass through and deter shadows in a museum or display case setting.
Zack Snyder (director of Dawn of the Dead, Watchmen and 300) has described his new film as “Alice in Wonderland with machine guns”, including dragons, B-25 bombers giant Mech suits and armies of undead German soldiers!
Sucker Punch, set in the 1950s, tells the story of Baby Doll (Emily Browning), who is trying to hide from the pain caused by her evil stepfather, imprisoned in a mental institution in she starts to imagine an alternate reality. She plans to escape from that imaginary world but to do that she needs to steal five objects before she is captured by an unknown adversary. In order to cope with her new stressful situation, she enters the hyper-real world of her imagination, and the lines between reality and dream begin to blur. Lessons learned in this fantasy world could help Baby Doll and her 4 friends; Amber, Sweet Pea, Blondie and Rocket escape their real-world fate.