The Raid’ is a ball-ripping, bash me in the face, gut crunchingly awesome flick! 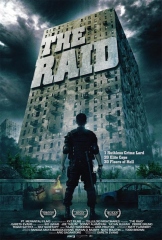 A lot of my friends have been telling me to go see ‘The Raid’ as soon as possible. So, finally I took their advice and was pleasantly surprised by how ball ripping, bash me in the face, gut crunchingly awesome this fucking flick was. This is the new school of action porn and it’s set to self destruct in your face! Okay enough of my crappy attempt at writing a poster tagline… Seriously, this movie was balls out crazy action with a sprinkled on plot. I’m not saying the plot was bad at all, it was just simple with a minor twist and a great set up to let this small group of cops tear it up in a run down tenement building filled with hop heads, killers, rat finks, and other lowlifes.

‘A SWAT team becomes trapped in a tenement run by a ruthless mobster and his army of killers and
thugs.’ 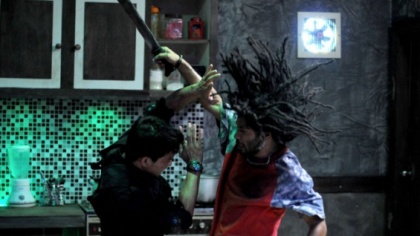 That honestly sums it all up, and between all those moments you have one of the most hardcore
non-stop action explosion in a long damned time! The film slowly builds the tension as the SWAT team
preps and gets ready to storm the nasty ass tenement. Once this happens the teams in for a surprise and
the ‘shit gets real!’

Once this film grabs you by the back of the head it NEVER stops pummeling your face into the
wall. I felt my blood rush through my body and wanted to jump into the action throughout the flick.
Director Gareth Evans is the new badass action director in town and he’s already wiped the floor with
the competition. I’m excited to see what he’ll do next and in the meantime I’ll be going to see ‘The Raid:
Redemption’ a few more times before it leaves theaters.

Angeles. He can be reached at CPL[ a t ]YouBentMyWookie.com or on
Twitter @CPLorusso.