From Pepper Spray Cop to the fighting in Libya, The Guardian has built a review of the top stories of 2011 (At least in the UK).

Who else, but one of the UK’s most prestigious and respected papers could put together such a classy review of the year in news. That’s right, they took the biggest stories of the year (in the UK) and built them all in Lego for our amusement! 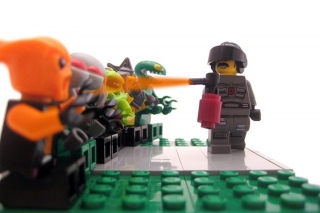 Here is the full list of news items and a gallery of all the images:

April 2011: Well-wishers, tourists and media gather to watch the Duke and Duchess of Cambridge’s ‘first’ kiss on the balcony at Buckingham Palace as a married couple following their wedding at Westminster Abbey

May 2011: US president Barack Obama and his national security team in the now famous photograph of them watching the mission to kill Osama bin Laden unfold in real time

June 2011: Barack Obama appears with the German chancellor, Angela Merkel, as they played down the prospect of a double-dip recession

July 2011: Rupert Murdoch’s wife Wendi Deng blocks him from getting cream-pied during a hearing of a government select committee hearing on phone hacking

August 2011: Rioters clash with police in London, Birmingham and Manchester, as local businesses and buildings are looted and damaged

September 2011: Protesters camped out in Zuccotti Park as part of the Occupy Wall Street movement, sparking copycat demonstrations across the globe

October 2011: Fighting continues in Libya between anti-Gaddafi forces and loyalists, as the rebels mount a massive attack on Muammar Gaddafi’s hometown of Sirte

November 2011: A police officer pepper sprays students at a protest in California sparked a series of online memes.

November 2011: Lego makes the news for real this time as a Lego Christmas tree is erected in London