But why does it look like a gummy candy?

Fake meat has been one of the holy grails of food science for the last decade. It could help the environment by preventing the need for all the C02 emitting (cow farts) animals in the world. It would satisfy the people who are morally opposed to killing animals for food. It would even provide a sustainable food option for starving countries. Enter Novameat.

The company has just shown off their brand new, 3-d printed, vegan steak. Sure, it may look like over-sized gummy candy, but it could also be the solution to world hunger. Italian bioengineer, Giuseppe Scionti has been focused on advancing the world of 3-D printed foods and he believes that Novameat is the best way to bring it to the masses.

What makes Novameat stand out (according to Scionti) is the texture. He claims that the combination of tissue engineering and bioprinting that he has developed is the first time that a printed food replacement has the traditional, fibrous texture of real beef. From a nutritional standpoint, Novameat also provides all the same protein, amino acids, and vitamins that you would expect in a steak, but it is derived entirely from plant-based ingredients.

One of the big things that sets Novameat apart from traditional beef is that is it shelf-stable. That means it can be packaged up and stored at room temperature. The result is a product that will not spoil in parts of the world where refrigeration, or even electricity, is scarce.

At its current state of development, it takes around an hour to print a 7 oz steak, at a cost of about $4.55. For Novameat to become commercially viable, it will need to find a way to cut down both the time and cost considerably. Still, we are pretty curious about what this gummy steak tastes like. 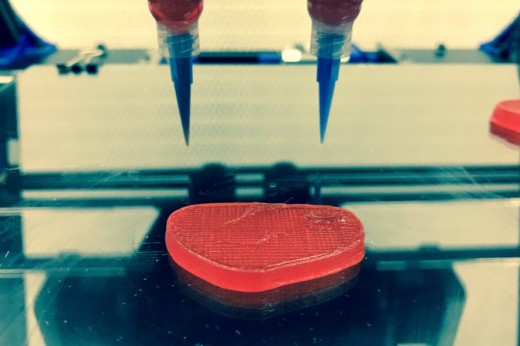