We don’t post a lot of Barbie stuff on the site because most Barbie stuff isn’t really that interesting. This however is really cool. French artist Jocelyn Grivaud, put together an amazing assortment of Barbie photos that near perfectly re-create several very famous works of art. The whole thing, called the ‘Poupée Poup Barbie’ collection was created to celebrate the 50th anniversary of the iconic Mattel toy. 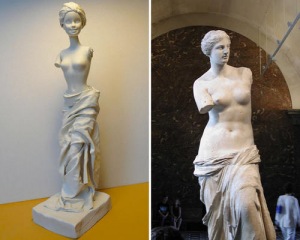