There has been some great Muppet art coming out lately, but these new classic style concert posters are absolutely some of the coolest.

There has been some great Muppet art coming out lately, but these new classic style concert posters are absolutely some of the coolest. They are the work of Illustrator Michael De Pippo and they manage to showcase all the members of the Electric Mayhem better than just about anything that I’ve ever seen before. He did posters of Dr. Teeth, Janice, Sgt. Floyd Pepper, Zoot and Animal. The only thing missing is a poster of the bus.

At first he was just going to make postcards based on this art, but he’s had so many emails since posting them online that he’s going to do a series of full-sized silkscreened posters to sell in the future.

Here’s what De Pippo said about what inspired him to make the posters.

My idea was simple; create a vintage concert poster for each band member…Using clean, crisp vectors, negative space and few colours, I wanted to keep them as simple and stylized as possible; reminiscent of retro posters from back in the day. 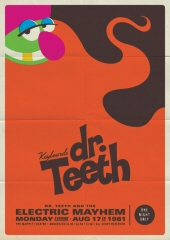