Check out the creepy taxidermy concoctions of Enrique Gomez De Molina and see if you think he belongs in jail. 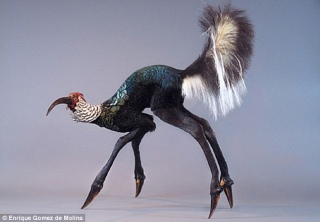 Other than the fact that his creatures don’t come back to life, a lot of people think of Enrique Gomez De Molina as a sort of Dr. Frankenstein. His hybrid taxidermy has become a highly collectible form of art, but just like Frankenstein, many of the townspeople are up in arms and ready to burn his castle to the ground. OK, that might be over stating it, but he is looking at a quarter million dollars in fines and up to five years in jail.

His statues, which can cost up to $100,000 a piece are created by combining various dead animals through taxidermy. However, according to the courts, they claim that some of the animals that he uses are from the corpses of endangered species.

The illegal animals he’s accused of using are: cobras, pangolins, hornbills, and the skulls of babirusa and orangutans from areas all over the world including Bali, Indonesia, Thailand, the Philippines and China.

He has been charged with possessing the skins of a Java kingfisher, collared kingfisher, bird of paradise, and juvenile hawk-eagle as well as the carcasses of a slow loris and a mouse deer, all from Indonesia.

Because he never obtained the proper permits, this means that he could be looking at a long time behind bars.

In his defense, he claims that he is doing this to raise awareness:

‘The impossibility of my creatures brings me both joy and sadness at the same time. The joy comes from seeing and experiencing the Fantasy of the work but that is coupled with the sadness of the fact that we are destroying all of these beautiful things.’