A German artist has spent the last three years traveling the world fixing crumbling walls and monuments using nothing but Lego. 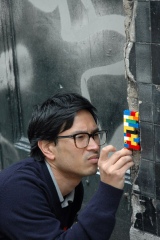 A 26-year-old German artist who goes by the name Jan Vormann, has taken it upon himself to travel the world fixing crumbling monuments and walls with nothing but Legos.

His project originally started from humble beginnings at an art fair in Rome and brightened up thousands of people’s days with his brightly colored plastic version of Polyfilla.

Since then, Vormann has traveled the world and acted either independently or with the city’s permission to leave a little part of his childhood behind.

Estimating to have used upwards of 1,000 of the little Danish building blocks, Mr Vormann enlists the help of passers-by intrigued by his careful placing of the Lego bricks.

“I like to think of my work as a Repair Manifesto,” said the Berlin-based installation artist.

“My work draws attention to the smallest parts of our cities that are falling apart because of the brightness of the Lego.

“It draws people’s attention through the coloured blocks and makes them aware that this wall or statue or construction is not complete anymore, for whatever reason.

“In the case of my latest project in New York which I completed in early March, I simply wanted to help the Mayor Bloomberg brighten up the great city.”

According to Vormann, “My favourite work was done in Berlin.

“I filled in the holes still left by guns and shrapnel from the Second World War.

“That drew peoples attention to the Lego and hopefully they would ask themselves why the Lego was there.”