If you’ve ever yelled the phrase: “This Is My Boomstick!”, then take a couple minutes and watch this awesome animated tribute.

There are few horror franchises that mean more to our generation than the Evil Dead Saga. We love it so much that we are even willing to consider waiting to see a first trailer before we start hating on the reboot. Well, one fan, Daniel Kanemoto, took his love and jammed it into this amazing animated love letter to the series. The coolest thing is that he conceived the entire thing after looking at the Mondo Movie Poster that was created for Evil Dead. Check it out below:

Follow the evil that roams through the dark bowers of man’s domain in this balls-to-the-wall animated tribute to the sights, sounds and unforgettable characters of Sam Raimi’s iconic EVIL DEAD trilogy!

This is my cinematic love letter to three influential movies that made me want to be a filmmaker: EVIL DEAD, EVIL DEAD 2, and ARMY OF DARKNESS.

I created all the artwork in the sequence, but the final image is directly inspired by an incredible EVIL DEAD poster created by Olly Moss. The moment I saw it, I only wanted to see it move – which is how I feel about all great posters. The new wave of artists working with Mondo have made movie posters worth collecting again, and that’s a great thing. I hope to someday join their ranks.

And I can’t wait to see the new EVIL DEAD remake. My studio specializes in title sequences, and I want the opening credits for this new journey to the cabin to be just as frightening and original as the film they introduce. (I would not-so-secretly love a chance to pitch my take, and if that’s even close to possible, I’m open for business at exmortisfilms.com.)

Special thanks to the cast and crew of the EVIL DEAD trilogy, Jeff Yorkes (who found me a print of that sold-out-in-an-instant Olly Moss poster), and Joe Pleiman, the most talented sound designer in the world.

Here’s the poster that inspired the video: 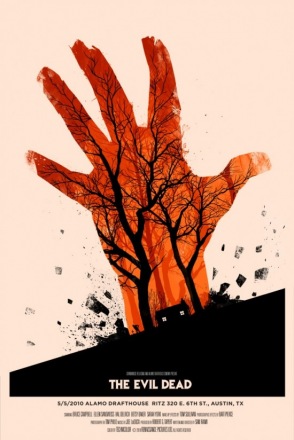