I’m not sure who is going to be more upset about this video, The Syrian Rebels or Disney.

Famed subversive graffiti artist, Banksy has just released his very first video on his YouTube Channel and it has over 2.5 million hits in less than a day. The video, “Rebel Rocket Attack”, features what appears to be Syrian Rebels shooting down an enemy aircraft. However, once the craft hits, they come to find out that they’ve shot down the beloved Disney character, Dumbo. The best part of the video may actually be the reaction of the child who is there where the rebels.

A lot of artists have trouble jumping from one medium to another. If Banksy keeps this up, his video work might become even more well known than his paintings. 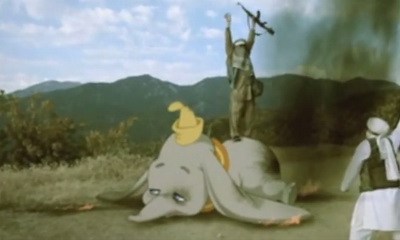