“I Seen The Naked Lady And I Got Mad… I just turned the page and I seen the naked ladies so I handed it to a grownup and said, ‘Look at this.'” 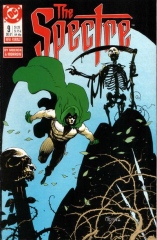 A local ABC news affiliate in Utah is reporting that a mother bought a repackaged two-pack of comics from a dollar store to give to her ten-year-old son for Easter and inside one of the comic books contained large drawings of a naked woman alongside content not suitable for children.

The comic book in question is a 1987 “The Spectre” #9 comic book published by DC Comics. No detail about the book was given other than the fact that it was a “naughty comic book” according to the TV station’s words.

“I seen the naked lady and I got mad,” says ten year old Sheldyn Conley, who loves comic books but knew something was wrong when he opened “The Spectre.” He says, “I just turned the page and I seen the naked ladies so I handed it to a grownup and said, ‘Look at this.’”

On the very first page are two drawings of a naked woman, although to the comic books credit, it was somewhat censored with a faint blue smoke conveniently draped around her “naughty” bits.

Stepfather Kenny Stong says, “He’s a little young to be exposed to that kind of situation or environment, what not.”

According to Linda Hurst who bought the comics to put in an Easter basket, “It really embarrassed me because I’d given it to a 10 year old boy.” Hurst had purchased the comics from a Dollar Tree store, and everything about the packaging made her believe that it was meant for children especially when the wrapper read, “All comic books inserted in the “Superhero Comic Book Spectacular” are family friendly and will bring hours of enjoyable reading.”

It must be a slow news day in Utah as it’s surprising that this load rubbish even made the news. While I will give the parents all the credit here because “The Spectre” really isn’t meant for a ten-year-old, was it really necessary to alert the press? Moreover, you’d kinda think that the cover of skeletons with scythes was kind of a dead giveaway that this wasn’t an appropriate Easter gift for kids.