Cat Rescued After Being Super Glued To Highway

A cat barely escaped with all nine of its lives after being cruelly super glued to a highway in Minnesota. 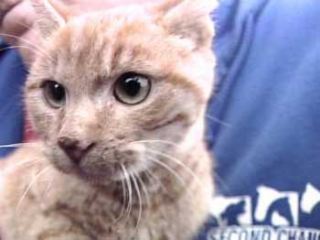 A cat barely escaped with all nine of its lives after being cruelly super glued to a highway in Minnesota.

Motorists passing by the stricken cat, named Timothy, did not bother to stop, thinking it had been injured.

But one couple driving along the busy road did decide to stop and investigate, only to realized that Timothy had his paws glued to the tarmac.

Rosey Quinn, from Second Chance Rescue, said: “It’s a mouth dropper because you are just like are you kidding me? But they did it.” She added the rescue service had never seen anything like it before.

Timothy is now recovering from injuries he suffered when he was removed from the road. Although rescuers took every precaution, his paw pads and claws were torn off.

Timothy is now being looked after by a foster family and may eventually be put up for adoption.