That must be one hell of a screen protector!

You don’t see people trying to kill each other with bows and arrows much anymore, but one man was lucky to find out that all you need to stop an arrow is your trusty old cell phone. Here’s the police report from the incident. 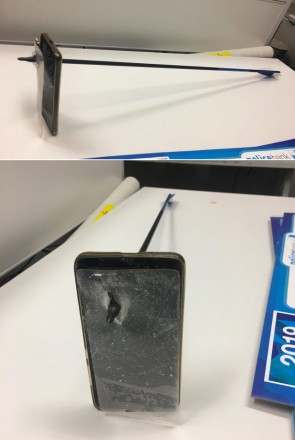 He noticed another man, who is known to him, standing outside his property allegedly armed with a bow and arrow.

The resident held up his mobile phone to take a photo of the armed man who then engaged the bow and was ready to fire.

It’s alleged the man fired the arrow at the resident which pierced through the man’s mobile phone causing the phone to hit him in the chin. It left a small laceration that didn’t require medical treatment.

Officer’s from Richmond Police District were called and arrested a 39-year-old man at the scene.

He was taken to Nimbin Police Station where he was charged with armed with intent to commit an indictable offense, assault occasioning actual bodily harm and malicious damage.