Due to bleak economy, the city of concord, California opts for a Christmas tree only Charlie Brown could love. 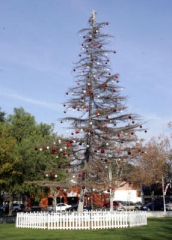 The city of Concord in California is in a budget crunch and while holiday trees are rarely a subject of controversy, the Christmas tree this year has many residents talking.

Instead of spending lavishly for a Christmas tree and shipping it in, as in the years past, Concord decided to save $20,000 and decorate a scraggly tree in the town’s plaza instead.

“We had to consider the city’s budget situation, and using a tree in the plaza is both less expensive and environmentally preferable,” says a spokesperson.

“The expense of doing a tree at this time when we’ve asked our employees to sacrifice and give up pay [seemed extravagant],” said Concord Mayor Laura Hoffmeister. “All of them have given up at least 5 percent of their salary, some as much as 10 percent. Plus, we’ve had layoffs.”

One woman who didn’t want to be identified described the tree as sad. She said the bareness of the scraggly tree reminded her of the economy.

“I think it’s sad that they decorated that tree only because it had electricity when we have trees on the corner that are healthy and more the spirit of Christmas,” explained the woman.

Despite some residents in the city hating the tree, many are taking it in great stride. Eight-year-old Amye Kirkham expressed her approval.

“It still has all the decorations and a big star on the top of the tree,” said Kirkham.

Meanwhile Concord spokesperson adds, “Although the tree in the plaza is smaller in size than a cut tree and has been compared to a Charlie Brown tree, it’s large in spirit.”

And keeping with the “Peanuts” theme, the city is also holding a blanket drive for a local domestic violence shelter — a gesture Charlie Brown’s Linus would no doubt approve.