I gonna pop some bags, only got twenty titles on my pull list
I’m goin’ shoppin’, looking for a comic, this is frakking awesome

You might of thought that the Thrift Shop Parody craze was over, but a new one has popped up in the wake of Dragon Con. Appropriately, this one is called Comic Book Shop.

[Hook]
I gonna pop some bags, only got twenty titles on my pull list
I’m goin’ shoppin’, looking for a comic, this is frakking awesome

[Verse 1]
Now walk into the mall like “What up?! I got a big box!”
Gonna fill it up with some books from the comic shop
X-Men with Iceman is so damn frosty
Damn, Bobby Drake is a cold ass honky

[Verse 2]
Rolling in hella deep, looking for some DC
Rockin’ Bronze Age, keep my arrow and my lantern green
Draped in a Robin cape, cardboard cutout next to me
Probably should’ve washed this, smells like King Cobra’s sheets
(Hissssss…)
But damn, it was 99 cents! (Bag it)

[Verse 3]
Coppin’ it, readin’ it, ’bout to go and get some Hero Clix
Passing up an Archie Comic for the latest Walking Dead
Paul Dini, Alan Moore, Peter David, George Perez
Goin’ in my bag, I’ma happy, that’s a bargain kids

[Verse 5]
They had an Age of Ultron, I bought an Age of Ultron
I bought a Captain Marvel, then I bought The Atom
Hello, hello, my Ant Man, my mellow
Hellboy ain’t got nothing on my Daredevil, hell no
I could get some Snake Eyes, Copperhead from G. I. Joe
The Cobra heads would be like “Ah, he got the Destro.”

[Verse 7]
I got a Watchmen with a big Manhattan and
Rorschach up in his thrift shop coat
I’m at the shop, you can find me in the stacks
I’m that, I’m that sucka’ hanging out with the fans

[Verse 8]
Your ladies, your mans, demand the costuming fans
Take the lasso and the bands and they rock that Wonder Woman
The grappling hook and the belt on the Batwoman
They hit the party and they purr like a Catwoman

[Verse 9]
They be like “Oh that girl, she’s hella fake”
I’m like “Yo … that’s no way to treat a fan”
Come here and listen, let’s do some simple addition
You knock her for a t-shirt, that’s just some ignorant biz (-ness)

[Bridge]
Hulk and Fantastic Four, Batman and Green Arrow
They’re in the books I got, from that comic shop down the road

Spider Jerusalem, Venom and Halo Jones
They’re in the books I bought, from that comic shop down the road 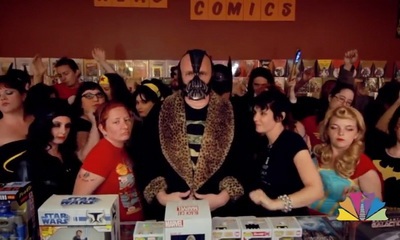