A cat has apparently returned from the dead – nine months after his owners had buried him. 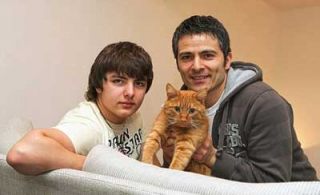 A cat has apparently returned from the dead – nine months after his owners had buried him. Angelo Petrillo and wife Katy were devastated when ginger tom Alfie went missing last June. Two weeks later, a neighbor told them Alfie had been spotted dead by the side of the slip road near junction 21 of the M62.

Angelo, 39, recognized the cat as his own and buried it in land near the family home in Milnrow, Rochdale. The couple moved to a house about a mile away in November. But this week they were stunned to receive a text message from the family who moved into their old home saying a ginger tom cat was going ‘berserk’ outside and trying to get in. They said it couldn’t be their cat as they had buried Alfie.

The calls continued however, and Katy eventually drove back to her former house to reassure them that it was definitely not their cat. But when she arrived and saw the cat, she was stunned to see that it was indeed Alfie.

“It was just unbelievable – the cat I had buried nine months earlier, the cat we spent about a month grieving over was back and my wife just couldn’t believe what she was seeing.

“I was 100 per cent certain the cat I had buried was Alfie – he had the same markings, was the same size and everything about him matched, so when my wife walked through the door with Alfie I was totally stunned – it was like he had risen from the dead,” says Angelo.

The couple do not know where Alfie has been living since the summer but their vet told them he probably got lost and by the time he eventually found his way home, the family had moved. Angelo added: “It is just one in a million – we even marked ‘Alfie’s’ grave so it’s amazing he’s back.”

Seems like Alfie’s down to just eight lives now.