The geeky side of President Obama explored in a humorous photo collection by artist Dean Trippe.

We all know about the geeky side of President Obama, from his love affair with Conan comic books to buying a Star Wars pop-up book for his press secretary’s six-year-old son. So when Obama was featured in an NYMag article entitled “A History of Obama Feigning Interest in Mundane Things,” artist Dean Trippe decided to take it upon himself to create a gallery that was quite the opposite. Opposite things that are totally awesome that is. 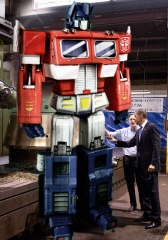