“This was the Ray Harryhausen and Tim Burton of the 18th Century.” 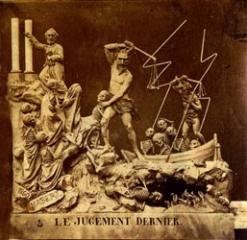 Depending on who you ask, we are either in the middle of the golden age of 3D or we are sinking deeper and deeper into a hell that is taking bad movies and making them even worse with a gimmicky effect. I think that 3D has merit and was really well used in films like Tron Legacy compared to hack jobs like the 3D on Clash of the Titans.

What most people don’t realize that 3D is nothing new. In fact, personal stereoscopes were giving people a chance to look a 3D images back in the 18th Century. Most of the images were just simple photos of buildings or people, but there was an entire subset called “Diableries” that focused on Satan and his daily life as the ruler of the damned.

Just like the guy in the video says… “This was the Ray Harryhausen and Tim Burton of the 18th Century.”