“Oh man, I’m so wasted. You know what would be awesome? Let’s steal a penguin!”

“Oh man, I’m so wasted. You know what would be awesome? Let’s steal a penguin!” At least that is my guess at how the evening started that led to the theft of a penguin from Sea World. The penguin’s name is Dirk and he’s OK. After realizing that owning a penguin wasn’t that much fun, the guys freaked at the realization that they had… you know, stolen a penguin. They then did the honorable thing and… dumped him in a ditch. He was found in distress, but unharmed.

That wasn’t the only adventure that the gang had that night. As you can see on their home video below, they also snuck into the dolphin habitat where they went for a dip with flipper.

Realizing that they were pretty well screwed, they gave the film they made of the night to a local news service (after trying to sell it first) so that people could see they meant no harm and were truly just a bunch of idiots. 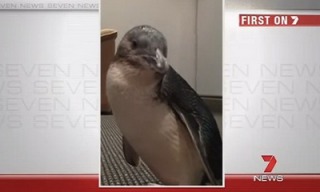