Now, it looks as though the man in the moon has got himself a little buddy.

It must be lonely out there in space. If you are the moon, you’ve been up there for millions of years, ever since you got chunked off the Earth. Now, it looks as though the man in the moon has got himself a little buddy.

NASA has just identified a particular space rock that’s apparently been orbiting our big blue marble for the last century. They’ve also figured out that the asteroid, measuring between 120 feet to 300 feet in diameter, will keep doing it for several hundred more while we both share a similar orbit around the sund.

So, the plain old rock that was formerly known as “asteroid 2016 HO3,” is now officially considered a mini-moon. I expect there to be a meme about this in the near future.

The whole situation is best explained by Paul Chodas, manager of NASA’s Center for Near-Earth Object (NEO) Studies at the Jet Propulsion Laboratory. He says it’s not so much a moon as it is a “quasi-satellite” of Earth rather than a true satellite.

“The asteroid‘s loops around Earth drift a little ahead or behind from year to year, but when they drift too far forward or backward, Earth’s gravity is just strong enough to reverse the drift and hold onto the asteroid so that it never wanders farther away than about 100 times the distance of the moon. The same effect also prevents the asteroid from approaching much closer than about 38 times the distance of the moon. In effect, this small asteroid is caught in a little dance with Earth.” 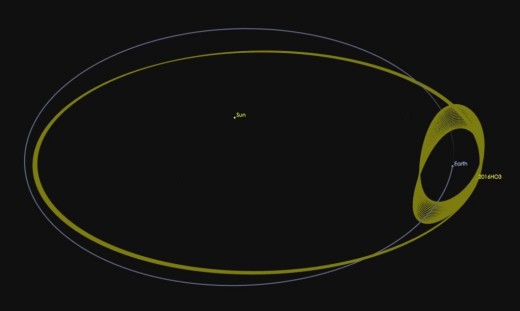