The car is self driving and can even come and pick up it’s driver. Basically, it’s the mother F’n Batmobile.

When Elon Musk was beaten to the punch with a safe upright landing of a returning rocket, he returned with a better one through Spacex in just a month. Now, Faraday Futures has come out with a futuristic new electric car that has 1,000 horsepower. It will be interesting to see how Musk and Tesla responds. 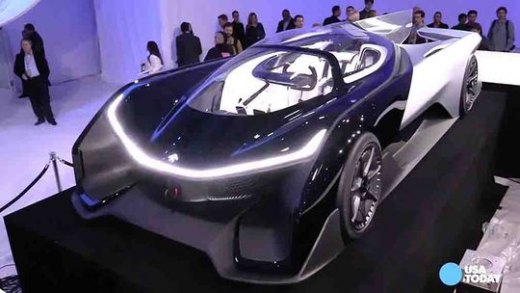 The new car, called the FFZERO1 supercar, has a 0-60 mph time of less than three seconds and a top speed over 200 mph. It’s being unveiled this week at CES to show off its quad core electric powertrain.

For over a year now, Faraday Future has been teasing a car that would “redefine the automotive experience by delivering seamlessly connected electric vehicles & future mobility solutions that will fit the needs of tomorrow’s population.” Now it looks like they’ve taken the first big step.

The basis for all Faraday vehicles is their Variable Platform Architecture (VPA). This platform helps save money for the company because it gives them the flexibility to create different models with up to three different engines at a time.

The tech isn’t just in the car’s power. The steering column has a built in smartphone as well as a Halo Safety System that provides oxygen and water to the driver. The car is self driving and can even come and pick up it’s driver. Basically, it’s the mother F’n Batmobile.