Filipino Man Gets Plastic Surgery To Look Like Superman

Think you’re the ultimate Superman fan? Think again. Fandom doesn’t even begin to describe Herbert Chavez who isn’t satisfied being just a fanboy with a Superman collection. He literally wants to become Superman himself.

Since 1995, Chavez has been undergoing extreme plastic surgery to radically transform himself into the Man of Tomorrow. While he may not be able to leap tall building in a single bound or be faster than a speeding bullet, by gosh darn he will at least look like his fictional DC Comics superhero idol.

Chavez intends on doing more work which includes his very risky upcoming “leg growing surgery” that he plans to undergo in Japan to increase his height.

Check out the video report here. It’s in Tagalog, but you get the idea… the dude REALLY loves Superman. 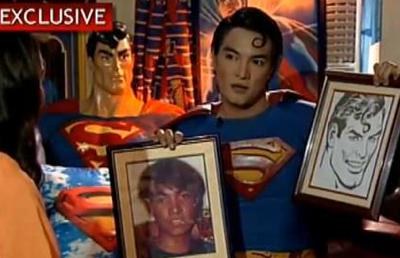