Germany Has Their Own Artificial Sun

In what sounds like the beginning of a Superman cartoon from the 1940’s The nation of Germany has just turned on their own artificial sun.

In what sounds like the beginning of a Superman cartoon from the 1940’s The nation of Germany has just turned on their own artificial sun. The good news here is that this isn’t a comic book and it looks like the new device will be used for good and not to usher in a new era of world domination.

The artificial sun, called Synlight, was created by German scientists to help people develop new environmentally friendly fuel sources. The device is made up of 49 huge spotlights, which give off 10,000 times the solar radiation naturally found on Earth. So, you should have on at least SPF 20,000 before you approach it. Amazingly, these aren’t special one of a kind lights. They are actually the same lights that are used in commercial movie projectors.

“These enable solar radiation powers of up to 380 kilowatts and two times up to 240 kilowatts in three separately usable irradiation chambers, in which a maximum flux density of more than eleven megawatts per square meter can be achieved.”

According to the group who created it, they are hoping it help them figure out a better way to use the light that the sun shines on the earth every day. However in an ironic twist, this new invention uses as much energy in four days as a family of four would use in a year.

In the end, the hope is that the short term cost will lead to long term gains, not the least of which could be better ways to capture solar energy and free the planet from a need for fossil fuels. 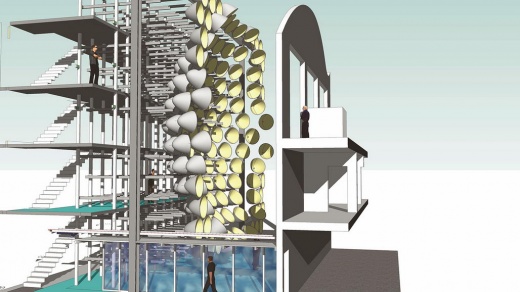